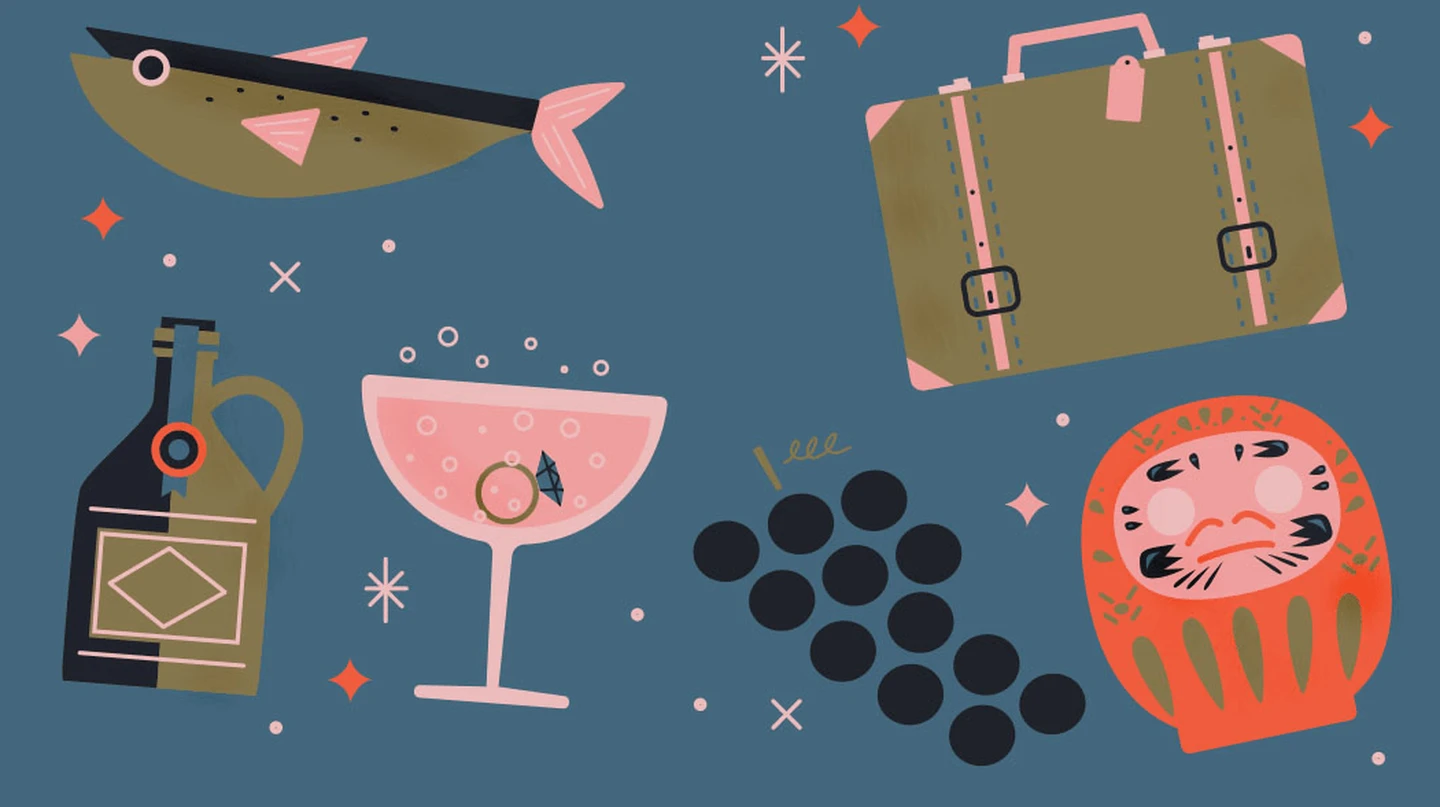 The New Year is a holiday celebrated worldwide, with unique dos and don’ts and various traditional foods from country to country. Here are 15 customs from all over the globe that’ll bring you prosperity, love, and good fortune in the coming year.

This post contains links. Thank you so much for your support and for helping keep this blog running!

Blacken the eye of a doll – Japan
In Japan, a daruma is a good luck talisman meant to encourage people in achieving their goals. A new daruma is purchased with blank eyes, and the left eye is filled in as a wish is made. When the wish is granted or one year has safely passed, the right eye is filled in. At the end of the year, the spent dolls are returned to a temple, where they are burned to symbolize moving forward from the struggles of the past year.

Don’t wash your hair – Korea
Korea is a highly superstitious country, and it’s considered bad luck to wash your hair on New Year’s Day. That’s because the new year represents a new beginning with fresh luck, and washing your hair essentially rinses all that luck away.

Eat fish for good fortune – China
Chinese culture is full of New Year’s customs associated with food and wordplay. For example, the word for fish in Chinese (鱼) is pronounced ‘yu’, the same as the word for prosperity (余), so eating a whole fish together with family is believed to bring wealth in the new year. There are many traditional rules associated with eating New Year’s fish, such as the head of the fish must be pointed toward elders, and the person facing the head of the fish must eat first.

Eat round fruit – Philippines
In the Philippines, eating circular fruit like apples, Asian pears, and peaches is believed to attract abundance and wealth. In fact, almost anything associated with round shapes is considered good luck, including wearing polka dotted clothing and throwing coins at the stroke of midnight.

Out with the old (literally) – Italy
An old New Year’s tradition in Italy is to throw household items like crockery, plates, and glass out of upper-storey windows to drive out bad omens and start the coming year fresh. Even though the custom has fallen out of vogue and is rarely practised today, it doesn’t hurt to keep alert for broken glass when walking around at night on New Year’s Eve.

Consume a dozen grapes – Spain
In Spain, it’s traditional to eat 12 green grapes, one for each strike of the clock come midnight on New Year’s – if you can finish them in time, you’ll have luck all year. The custom is said to have originated in 1909 when Spain experienced a bumper grape harvest in Alicante, its principal grape growing region. When you’re done, toast to the new year with a glass of cava, sparkling Spanish wine.

Eat with great gusto – France
In France, people spend New Year’s Eve with close friends and family enjoying a lavish multi-course meal featuring oysters, foie gras, and champagne. The meal is called le réveillon, the same as Christmas Eve dinner, so it’s sometimes referred to as le réveillon de la Saint-Sylvestre to help distinguish between the two. The dinner is said to welcome prosperity in the coming year.

Eat a carp and keep the scale – Germany
In Germany, Silvesterkarpfen (‘New Year’s Carp’) is a traditional dish to eat on New Year’s Eve. Carp is considered a lucky food in Germany, and keeping a scale from the carp in your wallet or around the house is believed to bring wealth to you and your household. However, the scale must be kept in your wallet all year, as removing it early would remove the luck.

Receive a gift from a tall, dark, and handsome stranger – Scotland
Celebrate Hogmanay, or the Scottish equivalent of New Year’s Eve, with a tradition known as the ‘first footing’. In Scotland, the first visitor to cross the threshold in the new year is said to bring good luck, especially if they’re tall and dark of hair – and the handsomer the better. The so-called ‘first footer’ typically arrives bearing gifts, including silver coins, shortbread, and whisky. Fair-colored visitors, however, are believed to be an unlucky omen as they call back to the Viking invasions of the 8th and 9th centuries.

Place leaves under your pillow – Ireland
For luck in love, Irish singles are encouraged to tuck leaves of holly or ivy beneath their pillow before they go to bed on New Year’s Eve, so that they’ll dream of the person they will one day marry. In modern times, the practice has extended to sprigs of mistletoe, although it is not native to Ireland, perhaps because of the adopted holiday tradition of kissing under the mistletoe.

Put a ring in it – Mexico
In Mexico, New Year’s is celebrated at the stroke of midnight with a drink of bubbly, as in many other countries around the world. However, one unique tradition amongst Latinos that was inherited from the Spanish, is to add a gold ring to the bottom glass before toasting ‘¡salud!’ in order to attract prosperity. In Mexico, this can be any small gold object, including gold chains, pendants, or a cameo brooch.

Burn an effigy – Ecuador and Panama
Burning a scarecrow stuffed with newspaper and sawdust, called an ‘año viejo’ in Ecuador and a ‘muñeco‘in Panama, is believed to drive away any bad energy from the past year and welcome in good vibes. The effigy may be given the face of a political figure that people would like to see less of in the coming year.

Take your empty suitcase around the block – Colombia
In Colombia, going for a walk around the neighborhood with your empty suitcase is said to bring a year ahead filled with travel and adventures. While some people simply wheel their bag around the house or leave it by the front door, taking your luggage on a proper journey around the block is said to better ensure your chances of journeying abroad. This tradition is not limited only to Colombia, but can be found in a number of countries around Central and South America.

Eat beans for employment success – Argentina
Eating beans is a New Year’s tradition in Argentina. It’s said to bring good luck in finding employment for job seekers, keeping their current job for those who are already employed, or landing a better job for those looking for new opportunities.


Pray away the bad – Nigeria
Nigeria is a diverse country, home to people of many different ethnic groups and religions. On New Year’s Eve, whatever their beliefs, Nigerians gather at their local churches, shrines, and mosques to renounce any bad deeds from the past twelve months and offer up prayers for an auspicious new year. Many people also travel back to their villages from the cities where they work, or even from other countries, to come home for the New Year’s festivities.