Chiz and Pid: Where in the World is Pid?? 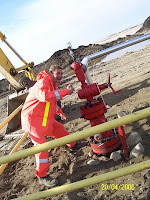 Chiz and Pid have a special type of Ying and Yang to them . I explained your typical Chiz in The adventures of Chiz and Pid! To Explain what Pid brings to this relationship it Started with a fellow named Stew(Pid). The Typical Pid can be described as a person who knows how to work, but fails to see the reasons why they should.

The Pid attitude is to make it through the day doing the least amount of work possible, including hiding in available buildings, equipment, and taking as many smoke/bathroom breaks as possible without getting caught. Pids would rather fake injuries to get out of labor work and stand around explaining how to do something instead of just doing it themselves. Pids in general have decent common sense but are masters at avoiding any type of work at all costs. Pids can come in any form and can easily be picked out by their loud mouths, lazy nature, and can usually be found surrounded by a Chiz or two.

This fellow Stew(Pid) arrived in Camp on the same rotation as Chiz, so for the first couple days we had Pid on T300 (Tracked Bobcat) duty. His job was to fork over large spool pieces and Bolt pallets that would be needed for the facility bolt up crews, if they didn't need anything then knocking down massive ruts the cranes would leave across the lease was priority number two. Stew was off to a good start getting things moved without dropping them in a timely and safe manner. 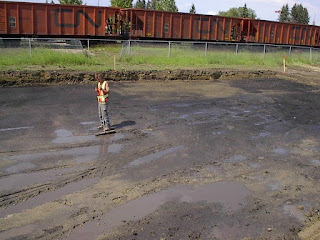 At first coffee everyone piles into the dog house to joke around and bullshit about what's going on around the facility. I overhear Pid talking to Chiz about how the mud is getting stuck in the tracks of the T300 and he wants Chiz to get a shovel after coffee and clean his machine. I think to myself why can't this guy clean his own machine. Ever since I was a young guy I have believed that the guy that gets the machine dirty should be the one cleaning the tracks. Getting help is fine but essentially an operator won't care what he drives in if he's not cleaning his own machine.

After coffee everyone starts to leave the dog house and I say to Chiz keep helping the bolt up crew he's assigned too and don't worry about shoveling Pids machine. Pid comes over and asks me what he's going to do about the hard packed mud in his tracks.

I explained to him that he could get a shovel and shovel them.

Pid responds without missing a beat " Well I have a sore back and I cant do it". 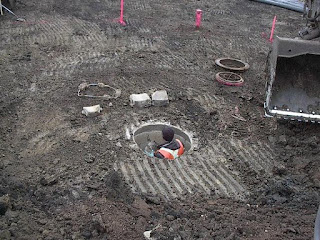 I ask Pid " How did you hurt your back? " . Pid Responds " All the bouncing when I'm driving across the lease is hard on my back" I replied to Pid " Why didn't you say something at coffee about how running the T300 was hard on your back? I can get you a different job on a bolt up crew if that's the case." Pids replies " Ohh no no that's fine, I will just go slower over the Bumps. "

By now I'm seeing the Pidness in this Stew guy. I explain to him that if he wants to loosen some of the hard packed mud in the rails he can drive through a near by puddle that was in the corner of the lease, then dig it our after its been soaked. 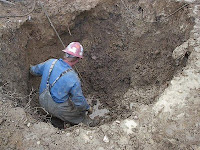 I walked back with my buddy ryan and complained to him that I had a bad feeling about this Stew(Pid) guy and explained the trying to fake a back injury to get out of shoveling his machine story. Ryan's like I will keep an eye on him from the top of the mods when im doing bolt up. Fair enough I jump back into the crane I am running and proceed to start Bolt up.

Everything seemed to be going good until I notice ryan giving me the stupid look from the top of the mods. I pop my head out the sunroof and ask him whats up? Ryan says " Hey Pids T300 is smoking over there!! " I turn around to look and here is Pid cruising across lease full speed and the tracks are smoking like crazy. I look at ryan and started laughing, Seriously how can this guy not see the tracks roasting off ! I said to ryan oh well it's almost lunch lets finish this up and I will talk to him during lunch. As ryan and I are walking across lease for lunch ryan is telling me that Pid spent most of the morning in that mud puddle over in the corner of the lease. I asked if he seen Pid shovel his tracks at all, and ryan was like no man the guy was in the puddle the whole time he wasn't ripping across lease. 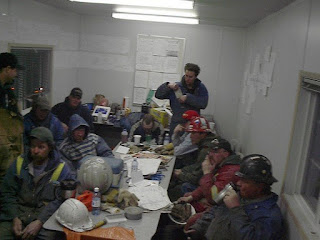 Just as ryan and I get to the dog house Pid rolls up in the T300, turns it off and gets out. I look at him with my patented dumb look and say " You didn't notice all that white smoke coming from your tracks the last half hour or so Stew(Pid) ? ". Pid replies " No didn't notice.". I ask Pid " Did you even clean your tracks at all since coffee? ". Pid says to me " No I just drove through the puddle more to keep the tracks from heating up ". I looked at Pid and pointed to the smoking Rock hard chunks of mud binding on the top corner of the high drive on the machine and said " Stew(Pid), you have to shovel those hard chunks out or your going to wreck a perfectly good set of rubber tracks on this brand new machine!!! " Pid tries to explain his reasoning behind not shoveling his machine but by now I'm walking in for lunch and ignoring him.

The Tracks on that machine were shoveled after lunch but Pid still ended up in that mud puddle all afternoon. At the end of the day I had decided that it was time for move Pid off the machines before he got too lazy and forgot that he was here to help bolt up crews.

In the morning after the safety meeting I was all caught up with my bolt up crew for lowing in new pieces so just bolt tightening and flange/Gasket lineup was left. I decided to take over the T300 work and get Pid to help the boys on bolt up. Well Pid was not a happy camper as I expected. The Bolt up crews consisted of two guys with harnesses on in the Mods and one guy on the ground handing them bolts and gaskets. Pid was all over the ground guy job, and once he learned that the slackest part of it was being the guy with the torque wrench that was his new career. At lunch I asked Pid infront of all the boys, hows that torque job going Stew? Pid Replies " Nothing is going to leak, I'm the best torque guy around. Been doing this for years! ".... Everyone kinda laughed.

Making a long Story short, for about two weeks solid Pid would not do anything other than go around with this torque wrench and be the bolt torquer guy. The funny part is as a machine operator my job is to pay attention. I notice what everyones doing and were they are on lease most of the time. While Pid is being a torque master, I am watching him ninja into buildings and hide a lot more than the other guys. I start thinking to myself this is going to be ugly when we start to pre test this plant and start filling with water and find everything leaking. So I decide I am going to spend a day with ryan and we are going to go back and check a few sections with the torque wrench.

Early morning I head over to the Mods with Ryan, Pid, Chiz and two other guys. I explain on the walk over how important it is that everything is tight and tightened properly blah blah blah. The same exact rant I gave Pid just before he started helping with bolt up. We get over into the Mods and I start checking bolts. I get two flanges in and start to find a few odd things. First thing I find is that some of the four inch flanges look crooked. As I look closed Pid had Tightend one bolt up as tight as he could and then went around creating a leaver action crushing the gaskets in the process, He was told to tighten the flanges like a tire. You have to tighten them across from each other snug at first, and then tighten them even all the way around.

After inspecting a handful of flanges a number of them had to be un bolted and the gaskets replaced. I expected this to happen but when someone argues that they know what they are doing and not to worry the job will be done right you want to at least give them a chance. Pid was not happy he had to un bolt and change out all the gaskets. 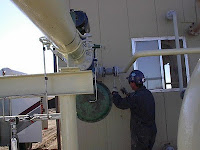 The next day after the safety meeting I asked ryan if he had seen Pid around? Ryan said no but over heard him asking the boss man to borrow a truck to drive into Fort mac to get pain medication. I already had a swamper steal my truck and crash it in town on this job so the boss man was not likely to lend anymore trucks to anyone. Anyways oh well i went to work.

At lunch again no Pid so I poked the boss man from across the lunch table and was like " hey what happened to Pid? You run him off last night? " Boss Man replies " He was asking for a truck last night to go to town but I said no. Have not seen him since." Right then safety hand tunes in and says " I watched Pid get into one of your guys trucks last night and drive off!" Boss man Replies" Ahh F#$# "

Thats the Story on how Stew had Pid added to his name. Keep an eye out for your local Chiz's and Pid's at a work place near you!

Support Future Blogs by checking out my Merchandise Store - AsianCoastline.com